A Solo show by Iqbal Durrani is being held end March in Artciti Gallery, Karachi.

An artist’s envisioned ecstasy can potentially inflict agony unless he works persistently with a sincere strategy. With the thin line between pain and excitement, a focused painter knows how to strike a balance between these extremities – the only way is to persevere! Iqbal Durrani is one such artist who, despite numerous physical and emotional distractions, never wavered and moved on determinedly. Working under strenuous conditions an artist feels trapped in some kind of a twilight zone which never seems to reveal light at the end of the tunnel. Durrani, nevertheless, is an artist who is hell-bent to plunge ahead without compunction or remorse!

The bold compositions that Durrani continues to devise, regardless of their culminating outcome, speak about the artist’s propensity to walk into uncharted territory of expression. Not only do these peculiar arrangements of living elements exude cohesive beauty but also an ambiance of tranquility and gorgeousness.

Strewn with experiences of suffering and emotional upheavals, Durrani’s poignant life taught him the magical process of transforming pain into remarkable paintings in the form of women, birds and flowers. What sets him apart from his contemporaries is the skillful handling of the palette knife, a tool that permits him to sculpt precise anatomical details of the subjects. Deploying a graceful spectrum of colors, enriched through a generous mix of white pigment, the artist tackles the complex phenomena of light. He believes that it is the incidence of light that gives the object its fascinating character and identity, is based primarily on the crucial addition of white.

Like most creative artists, Durrani also gathers inspiration from the famed Spanish artist Pablo Picasso (1881-1973) whose childhood was spent amidst pigeons. A painter in his own right, his father, José Ruiz Blasco, raised pigeons, which began to appear in his paintings. El Palomero (The Pigeon Fancier) was a title given to Ruiz. Subsequently Pablo’s father taught him how to paint pigeons in their hometown of Málaga, Spain. Hence the inclusion of feathered elements became inevitable in Durrani’s paintings.

Seasoned over more than three decades, what Durrani envisions is by no means a trivial perception, but a dream that emanates from the core of his profound insight. His spirit lurks in the enchanted land of fantasy to imbibe exotic forms and colors which eventually reappear on the canvas, depicting responsiveness and compassion. Imbued within the subjects, the subtle sentiments confer a graceful impact on the viewers who unexpectedly find themselves deeply engaged. Oozing with amorous emotions, the canvases lovingly grip the audience, momentarily sending them into an orbit of joyful reverie.

An apt choice of medium and tools, Durrani bears an unusual fetish for exploring the rich diversity of pigment layering and rare textures. As the eye sweeps across the canvas, one can sense exciting hues and the undulating contours resulting from a pleasurable application. Minimalized compositions, for the manner in which they are painted, have a propensity to stir the viewers imagination to interpret the embedded parables with a variety of plots. Regardless of what the story concludes, the visual experience culminates into serene fulfilment – leaving a lingering desire deep within to reconnect. According to the artist, depiction of female faces and torso convey the modern woman’s boldness and sexuality. Their distant gaze through sparkling eyes, denotes their determination to survive amidst a milieu of gender discrimination and insecurity. Inclusion of birds and flowers in his compositions sends out a message of harmony with nature – a unison that prevails since the genesis of mankind. Amour and affection are the elements that emerge from these works when often viewed, creating an ambiance of fondness.

Durrani’s interest in poetry and music has had a striking impact on imagery, which can be sensed in the rhythmic execution of the palette knife. Furthermore, the lilting movement of strokes, timed as if with the beat, produces and an equally synchronized variation of tone and hue. The resultant visual allegories, though silent, reach out loudly to the audience, deeply dowsing the soul with a subtle but serene gratification. Revealing his own spirit through tasteful vocabulary of forms and shapes, figures and birds, Durrani endeavors to communicate without barriers. Durrani says, “Creativity on canvas is synonymous to a universal language that is understood worldwide, even on the remotest islands of the Pacific.” 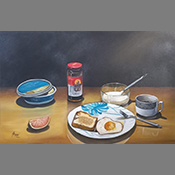 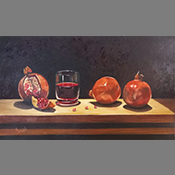 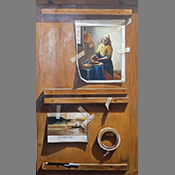 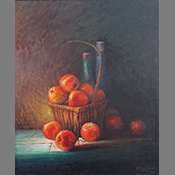 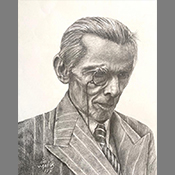 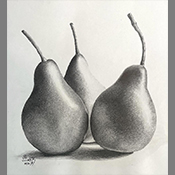