Vivid observation, passion and perseverance are the primary prerequisites for an artist to paint a subject with realism. Amidst today's vibrant milieu of contemporary art movements, there are just a handful of painters who continue to pursue Realism with faith. This is an art form that captures the true spirit of an era, its culture and characteristic, thus creating a permanent record for all times to come.

M. Fawad is one of those rare painters who have been specifically groomed in the distinguished field of Realism. He has been taught to look pensively through his eyes and decipher the inferred information into a huge but tangible database of visual information. This information is consequently transferred to the canvas with a prowess that has been honed over many years of persistent practice. The result of this disciplined demeanor are the striking paintings at this exhibition that mesmerise the viewers and swiftly give them an intimate feel of the subject and ambience of the work.

In the field of art, illusionistic Realism (or Naturalism) is an endeavor to portray the observed subject matter accurately, while sidestepping artificiality and contemporary deviations. What is also avoided is stylization, fantasy with imaginary forms, supernatural and exotic elements. It was in the 1850s (after the 1848 Revolution) in France that the Realism art movement in painting began. The domination of Romanticism over French literature and art led the realist painters to reject this movement which had started during the late 18th century.

One of the most outstanding feature of Fawad's work is that despite the super-realistic outlook, he manages to maintain a painterly treatment of the composition. It appears that the artist has always kept his focus on deploying two major ingredients to nurture his art, these are: super-realism and painting conventions that are in vogue. To combine these two ingredients harmoniously, Fawad makes use of his abundant skills to control the brush and the countless hues to arrive at the works that this exhibition unveils.

By virtue of the choice of subjects, Fawad is profoundly connected to the region's soil like a pure native. He takes pride and pleasure in everything that exists around him be it a trivial street or an object of daily use. There are items of ordinary nature, which are normally ignored by passerby’s, but somehow Fawad considers these banal objects as vital links to the way we live and think. Without giving these elements the necessary attention, we are likely to lose some of the building blocks that formulate and regulate our lives!

Karachi's typical old structures have remained Fawad's favorite and he has liberally expressed them in his exclusive technique. He is of the opinion that these valuable historic buildings will become extinct amidst the unstoppable deluge of high-rise monoliths and fancy plazas, therefore, he would continue to preserve these fading artifacts with undeterred conviction! 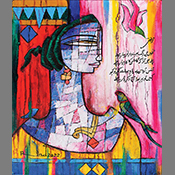 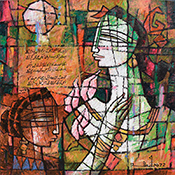 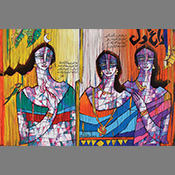 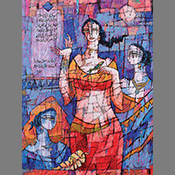